How essential is RAM speed? 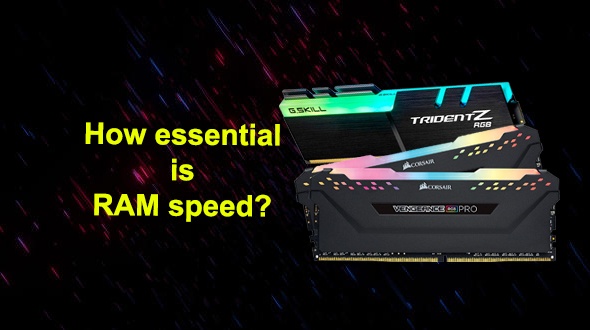 When a computer needs to retrieve data rapidly, it uses RAM. For example, whichever RAM Windows Operating System (OS) you’re using will always be loaded into your computer’s RAM as it starts up. That makes sense because a computer’s RAM OS is what allows it to run.

When you first start up your computer, everything like your browser, documents, images, and games all load from your hard drive to your RAM (strange enough, your processor does this). This is why your Random-Access Memory differs from RAM in that it has far more hard drive memory, allowing programs to run much faster.

The name “Random-Access” comes from this. Any of this pre-loaded data may be retrieved at any time, which means the RAM computer doesn’t have to traverse through the RAM bytes that came before it. At every point in time, any byte of memory may be accessed.

RAM is your computer’s short-term memory, whereas RAM hard drive is your computer’s long-term memory. There are things that your brain can acquire rapidly, just like when you’re working on a project. This is because it knows you’ll need that knowledge for whatever you’re working on right now. However, if you need to access something entirely different, it’s possible that you won’t be able to think of it as fast since it’s in your long-term memory.

As this question is frequently being asked about RAM speed, and how critical it is for specific tasks like gaming. The answer is a bit more complex than just saying that a larger number means something is better. So, what exactly is RAM speed, and why is it so relevant?

What is the speed of RAM?

To begin, let’s define some words. RAM speed is a misnomer. The frequency, bandwidth, total number of channels, quantity, dual data rate (DDR), latency, and even the speed/generation of your CPU all influence how fast your system’s RAM runs. Most people use the term “RAM speed” to refer to the frequency of the RAM – the number of requests it can process per second – so we’ll use that term here. RAM frequency is expressed in megahertz (MHz) and is generally listed after the DDR version in the RAM specification.

G–SKILL 8GB(3200Mhz)Trident Z RGB, for example, operates at a frequency of 3200MHz. The Trident Z RGB DDR4 RAM kit combines the most vivid RGB illumination with uncompromised performance, thanks to an exposed light bar with brilliant RGB LEDs, fused with the award-winning Trident Z heat spreader design and built with the finest quality components.

It’s crucial to understand that system RAM does not handle command operations in the same manner that the CPU does. Therefore, although a higher CPU frequency nearly always means increased PC performance, the same may not be true for high-frequency RAM. This is why, even though higher frequency RAM is technically faster, it does not translate into superior real-world performance.

If you are from Ranchi, then you must always wonder, which is the right place to buy RAM?

What Role Does RAM Speed Play in Gaming?

What effect does higher frequency RAM have on gaming benchmarks and/or frame rates now which is being demonstrated that it doesn’t always affect overall system performance? When utilizing a discrete graphics card, the video RAM – both quantity and speed – has a direct influence on gaming performance. When gaming, system RAM is rarely utilized. As seen in the figure below, RAM frequency has only the tiniest influence on gaming performance and the reasons already given. What are the drawbacks of upgrading your RAM?

So, while the higher frequencies of specific RAM are a showy characteristic, they won’t hurt, right? Higher frequency RAM is frequently overclocked to achieve such absurd figures, which may cause RAM-related problems, such as computer crashes and freezes. Though this isn’t always the case, it is always believed that encouraging system instability for the sake of a little additional performance is counterproductive. It is especially true when you consider how little you will notice in terms of extra performance. As a result, rather than offering faster memory, they currently offer DDR4-2933 ECC, DDR4-3200, or DDR5-4800 non-ECC RAM on most systems.

You can buy RAM as per your choice from Rehan Computers – The best Computer and Laptop Shop in Ranchi and get extra discounts if you buy from their Computer Shop Online. Start shopping for all the latest gadgets from their website and get heavy discounts and tech support from anywhere in India.