HOW TO SELECT THE BEST CPU COOLER? 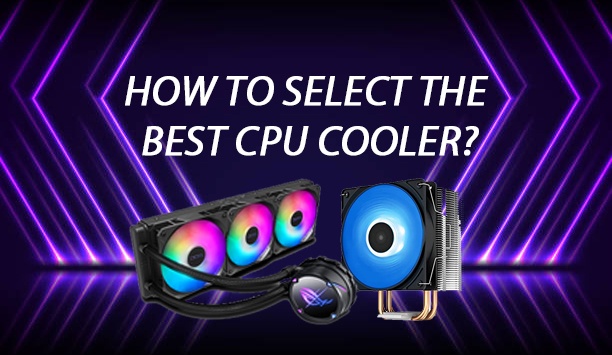 As the heart of the computer, the processor is an essential component of the computer system. To ensure optimum operation, minimize overheating, which will result in optimal performance. This is where a CPU cooler comes in; it distributes the heat created by the processor and ensures that your gadget always functions at the proper temperature. This article will assist you in selecting a CPU cooler that will work best for your processor and meet all of your demands.

WHAT IS A CPU COOLER?

A CPU creates heat while functioning and must be cooled to ensure peak performance. A CPU cooler is a device that is specially intended to cool the system CPU. It takes heat energy away from other important components, such as hot operating processors like graphics processors, without causing any hardware damage.

CPU Air Coolers: These are general-purpose, interchangeable, low-cost coolers that are best suited to general-purpose, bespoke PCs and desktops. They are made up of a mix of metal heatsinks and CPU fans that are meant to reduce the temperature of your electronic equipment. They increase their exposure to cold air by dispersing waste heat energy into the surrounding air. CPU air coolers are available in a variety of sizes, speeds, noise levels, and heat dissipation capabilities. The best CPU Air Coolers that you can buy is DEEPCOOL GAMMAXX GTE V2 at an affordable price at Rehan Computers Ranchi.

Liquid CPU Coolers: These coolers are best suited for regular PC users that overclock and hence have CPUs that are prone to overheating. Liquid coolers are far more effective than air coolers at controlling CPU temperature, but they are also more costly. Because they circulate liquid through the system through the tubing, taking heat away and releasing it outside in the ambient air, liquid coolers are also quieter. They are built in a very adaptable and modern manner, making them simple to integrate into any system. The Best you can buy is MSI Liquid Cooler 360R CORELIQUID at an affordable rate.

WHAT IS THE PURPOSE OF A CPU COOLER?

Regardless of whether the user plans to overclock or not, all computers require CPU cooling. Because even when conducting regular operations, your CPU can reach dangerously high temperatures, which can damage, throttle, or even ruin your processor. If there is no cooler to keep the temperature stable, your computer may shut down due to overheating. As a result, a CPU cooler is required to avoid unwanted overheating and keep the temperature low. This ensures that your computer executes all of its operations properly and without risk.

WHAT IS THE FUNCTION OF A CPU COOLER?

Both air and liquid CPU coolers work on similar thermodynamic principles and accomplish the same task: they absorb waste heat energy and disperse it away from the hardware. However, their mechanisms for heat dispersion differ.

Air Conditioners: The heat created by the processor is transported to the CPU’s metal cover, known as the IHS (integrated heat spreader). It is then transferred to a conductive base plate before being routed directly into the associated heat pipes. These pipes conduct heat to the thin metal fins that comprise the heatsink. The heat from the metal is absorbed by the fins, and the associated fan drives the heat away from the heatsink and into the surrounding air.

Similar to air cooling, heat is transferred from the IHS to the baseplate, which is filled with coolant. As it travels through the water block, the coolant absorbs heat and continues to run throughout the system via tubes to a radiator. By exposing the liquid to air, the radiator cools it, while a fan removes heat. The coolant is subsequently returned to the water block, and the cycle is repeated.

THINGS TO THINK ABOUT WHEN BUYING A PC COOLING SYSTEM

Some critical elements to consider while selecting the optimal cooling solution for your PC:

Size: It is critical to have enough space for your CPU cooling. There is a range of sizes available on the market to meet a variety of demands. Bulky coolers, for example, may not be suitable if you are operating on a smaller scale. As a result, it’s critical to double-check the cooler’s measurements. Make sure you have adequate room, especially before purchasing a liquid cooler, for the appropriate orientation of the water block, alignment of the coolant tubing, and radiator.

Temperature regulation: Although the temperature regulation powers of each type of cooler differ, each is extremely efficient in its own right. A liquid CPU cooler is an excellent alternative for quieter and more efficient operation. However, if you do not intend to conduct CPU-intensive tasks and prefer a less expensive solution, air CPU coolers will meet all of your needs.

Another element to consider is the ease of installation and maintenance to ensure you have the optimum cooling system for your PC.

WHERE CAN I GET A CPU COOLER?

A CPU air cooler and other genuine computer components may be purchased from the most reputable online shop for all computer accessories, with a specific emphasis on gaming. You can easily buy all accessories from the Best Computer and Laptop Shop in Ranchi i.e Rehan Computers.